By Tayo Fasuan and Chuks Ike 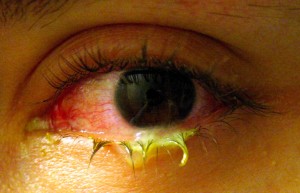 The above question becomes pertinent, when on a literature review of respiratory infections by some researchers, it was found out that viral respiratory infections have a form of relationship with the eyes. It was even discovered that the causative viruses have a kind of affinity (tropism) for the eyes, with some known to cause eyes infections and diseases.

While the causative viruses are often transmitted by inhalation of virus-containing aerosols and droplets from infected individuals, or by direct or indirect contact with virus-contaminated fomites on environmental surfaces, it has been discovered that the epithelia of the human eye is another mucosal surface which is equally exposed to infectious aerosols and contaminated fomites.

Questions and uncertainty still exist about what confer ocular tropism to some respiratory viruses or subsets of virus, and what mechanisms allow ocular exposure to viral pathogens to cause a respiratory infection. According to Jessica Belser, a microbiologist and associate fellow at the In?uenza Division and Division of Viral Diseases, CDC, and her colleagues, “To appropriately control and treat disease presenting with ocular complications, a more rigorous understanding of the relationship between the development of ocular symptoms and respiratory disease is critical.”

Over the next few weeks, insights would be provided on a regular basis to analyse and understand why the viruses which readily attack respiratory cells, either for initial replication or full colonisation, now readily attack ocular cells despite the expected disparities in tropism. Also, ocular findings after respiratory virus infection in humans and the current innovations which analyse properties governing virus tropism would also be examined. Stay healthy.