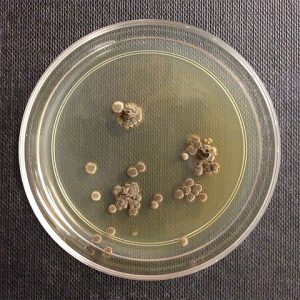 In a case report presented by a group of medical researchers in 2008, a fungus known as Wallemia sebi is now known to cause an infectious disease called Subcutaneous Phaeohyphomycosis in human. This will be the second report of such infection since 1950.

The infection, which was diagnosed in a 43-year-old housewife, resident of Varanasi in the State of Uttar Pradesh in northern India, has now generated a renewed interest in medical mycologists, who over the years have treated the fungus as contaminant in the laboratory due to its slow growth and inability to characterise it.

The woman, who was reported to present with a non-healing ulcer on the dorsum of left foot, has a lesion that was “erythematous at its base, mildly warm (to touch), minimally tender, and of 8 months duration; it had started as an itchy papule that gradually progressed to its present size (8 by 6 cm).”

She was reported to be non-diabetic and human immunode?ciency virus negative, with no other systemic or underlying disease. She could not also recall any injury to the foot prior to development of the lesion. Series of diagnostic and identification methods led to the detection of the slow growing dematiaceous mold, which was made more identifiable by the most common way of identification of fungi: detailed study of its morphology, both colonial and microscopic.

The infection caused, Phaeohyphomycosis, refers to infections of skin, subcutaneous tissues, and internal organs caused by some fungi generally referred to as dematiaceous or melanized fungi that produce pigmented hyphae and/or yeast-like cells in culture and frequently in the infected tissue.

Wallemia sebi, though a common causative agent of farmer’s lung disease, rarely caused human infections due to reports made in literatures between 1909 and 1950. It is a mold with a world-wide distribution, having been isolated from from indoor environments and in foods such as jams, dates, bread, cakes, salted beans, maize ?our, crystalline sugar, ?sh, bacon, fruits, and also in soil, hay, and textiles.

This fungus is also commonly found in agricultural environments in many parts of the world. As at the time of reporting that case, it is the only species of the genus Wallemia known to cause human infections, as there are only a few known cases of cutaneous or subcutaneous infections in humans due to W. sebi reported in the earlier literature without speci?ed clinical features. Hence, the report provided further evidence of a pathogenic role of this rarely known fungus.

An interesting fact is that while other pathogenic molds such as Fusarium, Acremonium, and Scedosporium nowadays infect mainly the immunosuppressed hosts, W. sebi has so far infected only immunocompetent patients. To explain this is also difficult as the rarity of W. sebi infections has made scarce any data on their clinical features and treatment.

However, W. sebi has now been added to a short list of basidiomycetous fungi that are known to cause infections in humans, and the occurrence of any related infection to the fungus is being monitored till date.