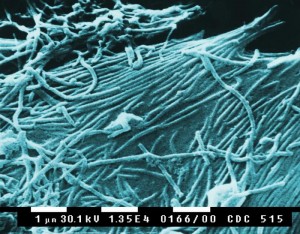 Ebola virus belongs to the viral family Filoviridae, a family containing another deadly viral pathogen known as Marburg virus. The biology of filoviruses has been very difficult to study. Most filoviruses are severe human pathogens that must be handled under bio-safety level 4 conditions (BSL-4), which restricts the number of laboratories that can work with the virus and the number of experiments that can be done. The virion is enveloped, as is the case for all minus-strand viruses, but rather than being spherical, the virion is long and thread-like (whence the name “filo” as in filament).

Most of the known filoviruses cause severe hemorrhagic fever in humans with a mortality rate as high as 90%. Because of the dramatic symptoms of the disease involving bleeding from multiple orifices, and the high fatality rate following infection, these viruses, especially Zaire Ebola virus, have been the subject of much discussion in the popular press and have appeared in a number of works of nonfiction as well as fiction. To date, Ebola viruses have caused only a limited number of human cases, but there is always the fear that if the virus were to adapt to humans in a way that allowed for easier transmission, it could become a very big problem.

Ebola virus is maintained in animal host(s) in Africa. The exact geographical spread of the disease in animals is not known, but the first case in an outbreak becomes infected through contact with an infected animal. Confirmed cases have been reported in the Democratic Republic of the Congo, Gabon, Sudan, the Ivory Coast and Uganda. However, various recent reports indicated that it is spreading across West Africa, especially causing an epidemic in Sierra Leone, though these reports are somewhat being disputed, with claims saying it is Dengue fever, another viral haemorrhagic disease.

Incubation for Ebola virus is about 10 days; 5 – 7 days for needle transmission and 6 – 12 days for person-to-person spread.

The onset is abrupt, with fever, severe headache (usually periorbital and frontal), myalgia, arthralgia, conjunctivitis and extreme malaise. Sore throat is a common symptom, often associated with severe swelling and dysphagia, but no exudative pharyngitis. A papular, eventually desquamating rash may occur in some patients, especially on the trunk and back, and morbilliform rash has been observed on white skins. Gastrointestinal symptoms develop in most patients on the second or third day of illness, with abdominal pain, and cramping followed by diarrhoea and vomiting.

The bleeding begins about the fifth day of illness and is most commonly from the mucous membranes: gastrointestinal tract, gingiva, nasopharynx and vagina. The persistence of vomiting and the onset of any signs of mucosal bleeding carry a high risk of fatal outcome, which is associated with hypovolaemic shock. It has been noted that bleeding is insufficient to account for death.

Infection in pregnancy results in high maternal fatality and virtually 100% feotal death. Central nervous system involvement has led to hemiplegia and disorientation, and sometimes frank psychosis. Even in convalescence, patients show prolonged weakness, severe weight loss, and in a few survivors serious but reversible personality changes are recorded, namely confusion, anxiety and aggressive behaviour. Ocular involvement is also seen, and may be persistent

The natural reservoir of Ebola virus in Africa has been shown to be bats, with recent evidence as at 2007 suggesting that the natural reservoir for Marburg and Ebola hemorrhagic fever viruses is a common African fruit bat. Monkeys, gorillas and chimpanzees have also been identified as the sources of outbreaks. Person-to-person spread of the virus is aided by contact with blood or secretions of an infected person. The infection often spreads within families involved in caring for infected persons. Hospitals may also act as centres of virus amplification for the further spread of virus in the wider community.

Risk factors associated with human-to-human transmission are infection from contaminated materials, particularly sharps, preparation of victims for burial or, occasionally, sexual contact. With few exceptions, transmission of filoviruses among humans has been the result of lax medical procedures or unwise behaviour. But unprotected direct contact with blood or secretions from patients ill with Ebola is the most important factor in determining risk of illness. WHO identified injury or injection with a contaminated needle as carrying the highest risk, and the highest likelihood of death. Close contact with blood or tissues of infected monkeys is also important, especially in the laboratory.

Medical personnel who do not take simple, barrier nursing precautions, however, are particularly at risk, as are their uninfected patients who may become exposed during treatment. Also, outbreaks have been abruptly terminated when blood and/or needle transmission were interrupted. Epidemiological studies have ruled out spread through casual contact or by aerosol transmission, hence Ebola is not an air-borne disease.

Care should be taken in both drawing and handling blood specimens since virus titres may be extremely high, and the virus is stable for long periods even at room temperature. Gloves should be worn at all times, and discarded directly into freshly made disinfectant. All sharps (instruments, needles, syringes) should be discarded in a puncture-resistant container with a lid, as is recommended for HIV-infected specimens as recommended by Centers for Disease Control and Prevention, 1988. In Africa where resources are limited, discard of sharps into freshly made chlorine is recommended by WHO. All discarded materials should be burned in a deep pit.

There is no specific treatment as no antiviral treatment is available. Also, There are no known prophylaxis for the disease.Good supportive care is given for quarantined patients.

Supportive Care: Fluid, electrolyte, respiratory and osmotic imbalances should be managed carefully. Patients may require full intensive care support, including mechanical ventilation, along with blood, plasma or platelet replacement. The maintenance of intravascular volume is a particular challenge but every effort is justi?ed since the crisis is short-lived, and complete recovery can be expected in survivors. Pregnant patients may present with absent fetal movements, and maternal survival may depend on aggressive obstetric intervention. Heparin has been advocated but remains controversial and potentially dangerous.

Containment: It now appears that bat-infested environments and bat guano should be considered potential sources of infection, as should sick or dead apes in the rain forest. Prompt identification of active cases is critical, and is in great part dependent on an accurate and detailed history. Interruption of person-to-person spread of the virus is essential to control. The most important issue is that of awareness in the medical community that the disease exists and it may result in extensive nosocomial spread if not recognized early and if appropriate isolation of the patient is not achieved. Thus early institution of safe and orderly care of the ill can be set up with effective surveillance of high-risk contacts and prompt isolation of further cases. This has been shown to ensure rapid control of an epidemic.

Contacts: High-risk contact is associated with direct contact with blood or body fluids from acutely infected humans or animals, or sexual contact with a convalescent case. Laboratory accidents must be treated seriously, with careful review of level of risk. If this is thought to be high, isolation for the incubation period (17 days is adequate) and tracing and surveillance of any further potential contacts such as family members are necessary. If the risk is low, simple surveillance of the individual by daily telephone contact for fever during the incubation period suffices. It must be remembered that bio-containment facilities do not protect against injury with needles or other sharps. There is no evidence for or against the use of passive antibody in prophylaxis. Suitably screened and stored material is in any event unavailable.

Hospital Containment: The key to prevention of transmission in both endemic and non-endemic areas has consistently been good hospital and laboratory practice, with strict isolation of febrile patients and rigorous use of gloves and disinfection. Intensive care, surgery and air transport should not be denied. Patient isolators are not recommended since the hazard to contacts is not aerosol, but direct inoculation of virus in blood or other material. Isolators induce loss of manual dexterity and fatigue, inhibit intensive care procedures and communication, do not protect against sharp instrument injury and have no provision for resuscitation. The 1988 Centers for Disease Control and Prevention guidelines for the management of patients with viral haemorrhagic fever recommends routine patient isolation in a single room, preferably but not necessarily with negative air pressure gradient from the hallway, through an anteroom to the patient room. Staff education and strict supervision, use of gloves, gowns, masks and rigorous disinfection with fresh liquids are mandatory. The recommendations issued for management of AIDS patients are also adequate for containment of ?loviruses. Since most cases occur in hospitals in more remote parts of Africa, common sense, and careful use of good techniques and disinfectants by trained staff is the best approach.

How Ebola virus was controlled in Uganda: An example to Nigeria in case of outbreaks