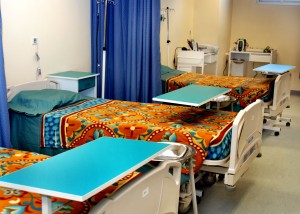 In 2006, a friend of mine went to the General Hospital in our town to treat dysentary, which he contracted by eating contaminated salad. Of course, he got better. But something else happened: he was admitted in the hospital two weeks later and diagnosed with pneumonia, which on retrospection, he had incidentally contracted when on admission for dysentary. When he was carrying out his project research later the subsequent year, he ironically focused on microorganisms that could be isolated in hospital environment. You can guess what his result showed: numerous numbers of pathogenic microbes littered the hospital environment and objects.

His result showed that formites (inanimate objects) around the hospital were the major sources of infection transmissions between the staff and patients. These fomites include surgical instruments, door knobs, toilet seats, beds and matresses, drugs/treatment trays, laboratory/ward coats and many others. The result was so outrageous that he was disallowed from completing his sample collection and directly threatned by senior management of the hospital to discourage him from publisizing the result. It was that bad!

But that has been the way of things for a long time, even despite the repeated emphasis laid on how John Lister’s use of aseptic techniques in hospitals as far back as the 18th century. Hospitals have never been safe, not completely anyway, and it may never change. The only unfortunate thing is that people seem to be ignorant of this, which complicates issue.

Hospital acquired infections (HAIs) or popularly called nosocomial infections are notorious, because of their increasingly resistant nature to drugs and other antimicrobial treatments. They are caused usually by hardened microbes which have been exposed severally to treatment and have survived. But their incidences are aided, mostly by carelessness on the part of the hospital management and a bizarre I-don’t-care-attitude on the part of professionals who should know better.

Generally, factors aiding spread of nosocomial infections as given in Burton and Engelkirk’s Microbiology for the Health Sciences include:

Of course, people can argue till tomorrow that they don’t usually contract infections from hospitals, but questions should be ask how they know they didn’t when they never thought it is possible. Recently, attentions have shifted from persistent training of hospital personnel on how to prevent spreading of nosocomial infections to the patients and their relatives on how to avoid contracting infections in hospitals.

To know how to prevent contracting HAIs, we have to be familiar with the various ways infections can be transmitted in the hospital. It is like taking a revision course in different types of infectious diseases, and based on this, infections could be air/droplet-borne, blood/body fluid-borne, formite-borne, food/water-borne, and many other types of ‘borne’. Knowing how an infection would be transmitted is the best approach to know how to prevent it.

Most of these infections, especially formite and food borne infections, could be prevented by observing simple hand-washing routine, except air-borne and sexual-borne infections. Hand-washing is perhaps the most effective means of preventing hospital-acquired infections after contact with either the patient or any inanimate object in a hospital environment. Washing hands everytime after visiting hospital may look like a case of paranioa, but having lifestyle of being careful within a healthcare facility is now becoming necessary due to the increased in incidence of nosocomial infections in recent years.

Hand-washing has been deemed necessary whenever one does some activities. As said in Burton and Engelkirk’s Microbiology for the Health Sciences, these are common sense procedure everyone should follow.

Wash your hands before you:

Wash your hands after you:

Also, you should wash your hands in the following manner to ensure adequate sterility:

Of course, hand-washing is very necessary in preventing transmission of diseases and infections outside the hospitals as well, and people should religiously do it after being exposed to potentially contaminated materials or infected people before using their hands to eat, pick their noses or ear, scratch the skin, touch their eyes (or change contact lenses as stated above) and many other things.

Airborne/droplet-borne infections are perhaps the most difficlut to control, either within the hospital or outside of it. This is because the direction of flow of air is usually unpredictable. These infections can be spread by coughing, sneezing, talking and other actions that can release pathogens into the air. Prevention is usually be wearing on nose-mask if (or necessary when) visiting a patient. Ideally, patients with potentials for transmitting dangerous airborne infections like tuberculosis and pertusis are kept in isolation, and special protective gadgets are needed to be able to interact with them.

Unfortunately, one might not even be with an infected patient to contract this type of infection. I will give two examples of this. Years ago, my father had an acute respiratory infection which involves sneezing, coughing, runny nose and teary eyes. It wasn’t really pleasant. So, on the day I took him to the hospital, he sneezed heavily, just once, while waiting for our turn with the doctor and that was it. I apparently didn’t want to ‘embarrass’ my dad by covering my nose in the presence of people and that was my undoing, because three days later, I came down with exactly the same symptoms and I had to go for the same treatment he had. On another occasion, a friend of mine contracted pertusis when a patient that was being wheeled to intensive care unit coughed as they passed him by while in the waiting room. At that moment, an handkerchief would have prevented that transmission. So one has to be careful, and not hesitate or be embarrassed to avoid contracting unwanted illnesses.

Blood borne infections are totally avoidable for those visiting the patients, maybe not entirely for those taking care of them, and certainly not entirely for the health-care personnel involved. Care must also be taken during interactions to avoid contact with blood. Other body fluids can transmit infections when cleaning up patients, or as improbable asit might sound, having sexual intercourse with them. Incidences of HAIs through sex between patient-patient, patient-personnel and personnel-personnel are not uncommon anymore and all these should be avoided to reduce or eradicate hospital-acquired STIs.

Food-borne infections in hospital environment are prevalent in hospitals with commercial cafeteria where patients’ food can be bought and interaction with hospital personnel is inevitable; workers’ kitchen where personnel foods are prepared and; eating room where hospital personnel mingle. People on visitation can easily contract infectious diseases in food cafeteria becasuse of the persistent unethical behaviour of doctors and nurses with the habit of wearing ward-coats to where people eat.

In conclusion, food-borne infections can be prevented by: