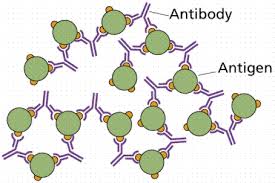 Before I launch into the topic proper, there is need to do a brief introduction about antibodies themselves. Antibodies, which are also referred to as immunoglobulins, are chemical substances synthesized by the B cells components of the immune system of higher animals. They are produced in response to the introduction of ‘foreign’ materials into the body. These foreign materials include bacteria, viruses, toxins, particulate matter like dust, pollen and even transplanted organs from other animals of related species.

The moment the immune system of an individual does not recognize any substance, either soluble or insoluble, as part of the ‘self’ components (components belonging only to that individual), it will be attacked, and antibodies are one of the weapons at the system disposal. Antibodies are specific in actions, being produced against specific substances. This means that if an antibody is produce against substance A, it will not react against substance B except if substance B has a particular maker(s) on its surface that is chemically similar as that on surface of substance A. This marker is called antigen, and they will be discussed later.

So, antibodies can be synthesized virtually against any known substance as long as the substance is foreign and can stimulate the immune system. However, some substances are generally ignored by the immune system in a process referred to as immune tolerance. These materials include but not limited to ingested food and drugs, residential microorganisms of our body (normal microbiota), the foetus and of course the sperm.

Feotuses and sperms belong to some areas of the body referred to immune-privileged sites where the activities of the immune system do not exist or are extremely limited. These areas include the central nervous system (brain and spinal cord) and the reproductive system (the testes and the ovaries), the eyes, and the plancenta (including the feotus). Invasion of these areas by the immune system usually lead to serious disorders and diseases such as meningitis, encephalitis, myelitis (CNS), miscarriage/birth defects (placenta and feotus) and infertility (testes and ovary).

So under what condition would the immune system produce antibodies against the substances it was hitherto tolerating? What can lead to the production of anti-sperm antibodies (ASA), which as the name implies, are antibodies synthesized and directed against the sperm cells produced in the testes?

As previously stated in immunopathology, the immune system can lose control of any of its weapons, turning its actions against the body it is under obligation to protect. This is called autoimmunity, and it usually resulted from the failure of immune tolerance. Most cells of the immune system are able to exhibit immune tolerance through the process of clonal deletion during the different stages of production and maturation of these cells. During clonal deletion, the cells of specific immune response (T and B cells) are exposed to antigens on surfaces of self components; any cells which react with the self components will be destroyed while those which do not react will progress to full maturity.

In men, sperm production doesn’t start until puberty, long after immune tolerance is completed and the various self components of the body have been duly recognized and noted by the immune system at infancy. Also, since the sperm cells are produced in the testes, which is protected by the blood-testis barrier, autoimmune reaction does not occur. However, various conditions such as injury, infections of the testicles and vasectomy can expose this protected area to the immune system and cause havoc by producing antibodies which bind to the unrecognized foreign antigenic sites on the sperms. These antibodies are called anti-sperm antibodies, and they are classified under auto-antibodies, that is, antibodies which react against self components.

Debates have been going on this for a long time as various researchers have concluded that conditions such as obstruction of the male reproductive tract (MRT) due to inflammatory and post-inflammatory changes, tearing of the blood–testis barrier because of local inflammation, decrease of the immune-modulatory factors in seminal plasma, or cross-reactivity between sperm antigens and those of microorganisms are not sufficiently supported by clinical studies. But they all agree that surgery, especially of the epididymis and vas deferens usually carried out in vasectomy, is a risk factor.

The discovery of anti-sperm antibodies in compatible couples with functional reproductive systems, but who are unable to produce babies, has led to immense breakthrough in the field of reproductive science. Immunological tests, alongside other fertility tests are now being recommended for couples having infertility problems. Studies have shown that over 80% of infertility in couples which have no reproductive defects is due to the presence of anti-sperm antibodies. This is enough reason to conduct routine immunological test when checking for causes of infertility issue.